Since its founding as the Commission for Interracial Cooperation in 1919, the Southern Regional Council (the "Council") has pursued a mission of promoting racial justice, protecting democratic rights and broadening civic participation in the Southern United States. During the 1940s the Council led the campaign to end all-white primary elections, and in the 1960s and 1970s the Council registered an unprecedented two million African American voters through its Voter Education Project.

During the 1990s, with major support from the Ford Foundation and the National Endowment for the Humanities ("NEH"), the Council engaged in a major effort to co 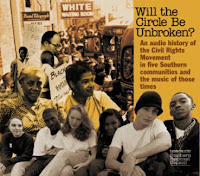 nduct interviews and assemble an oral history of the American Civil Rights Movement. This effort resulted in the release of Will the Circle be Unbroken? An Audio History of the Civil Rights Movement in Five Southern Communities and the Music of Those Times. This 13-hour, 26-episode production, which was broadcast several times nationally on public radio, received a Peabody Award in 1997. The Council also produced a limited number of CDs and tapes which were made available for sale to the general public and to institutions, with modest revenues going to support the work of the Council.

Building on the success of this effort, the Council developed a teacher's guide, as well as a curriculum for use in teaching the lessons of the Civil Rights Movement in middle and high schools. The curriculum was successfully piloted in the public schools of Columbia, South Carolina and DeKalb County, Georgia.

The Council is justifiably proud of the Circle project. Scholars have reported that the original interviews - now housed at Emory University - foster a unique appreciation of the role of countless unsung heroes in bringing about tremendous social change in our part of the country. Part of the project's appeal stems from the fact that it combines original oral history, archival material, and the music of the period. Institutions have reported that the project's dramatic blend of interviews and music results in a singularly effective teaching tool. The Council continues to receive inquiries regarding this work. Every year the Council receives numerous requests for copies and requests for the right to rebroadcast all or part of the series. As many states have mandated the teaching of African American history, the council also sees an increasing demand for the sort of curricular material which we have developed.

However, the Council presently finds itself unable to address these needs. The rights which it acquired in the music were for a limited time, for a limited number of copies, and the time has expired and the licensed quality of copies has been virtually exhausted. The rights also covered a limited range of media: While these rights covered CDs, tapes and broadcast, they did not extend to Internet, digital and new media.

Over the last year, the Council has pursued an effort to make the Circle project available to the wider world once again through renewal and extension of the intellectual property rights, the production of additional copies, release through the Web and new media, and the revision and promotion of the companion curriculum. Working with Circle's original director George King, the Council has engaged Louise Shaw as Project Director, engaged Kevin Bronski as Project Manager, initiated a collaboration with Emory University to work with the archival and other materials associated with the project, partnered with the Atlanta College of Art on the design and production of a new website, worked to establish other institutional partnerships in support of the project, assembled a team of reviewers to update the curriculum, worked to assemble a panel of scholars, and initiated discussions with NEH regarding possible NEH support of this effort.

Posted by Charles Johnson at 3:49 PM