In 1966 Julian Bond, in the face of blistering criticism for his opposition to the Vietnam War, said “I hope that throughout my life I shall always have the courage to dissent. It is from this statement that Tomiko Brown-Nagin takes the title of her Lillian Smith award-winning book, Courage to Dissent: Atlanta and the Long History of the Civil Rights Movement.
Tomiko Brown-Nagin is a professor of law and history at Harvard University, and she previously held appointments at the University of Virginia and Washington University. Dr. Brown-Nagin earned her Ph.D in history from Duke, a law degree from Yale (where she served as editor of the Law Review), and a Bachelor’s Degree from Furman.
Tomiko Brown-Nagin has written a remarkable and highly praised book in Courage to Dissent. It is a bottom-up narrative, illuminating the parts played by local activists and attorneys. These were people whose courage to dissent applied, not only to the white establishment, but also to the traditional black leadership of Atlanta, the national civil rights movement, and the NAACP Legal Defense Fund’s high-profile attorneys.  Their dissention, Dr. Brown-Nagin argues, created an intra-racial tension that helped to energize the movement in Atlanta.
In a review of Courage to Dissent, Kathryn Naistrom writes that the book succeeds brilliantly, both as narrative history and legal analysis.  For Lillian Smith Book Award winner Ariela Gross, Brown-Nagin’s work heralds a new kind of constitutional history – that it’s a book that tells the stories of the good fight waged by ordinary people who, whether or not they actually won, had their day in court and became agents of change.
In March 2012 Columbia University announced that Courage to Dissent would receive the 2012 Bancroft Prize.
In accepting a Lillian Smith Book Award for 2012, Professor Brown-Nagin remarked as follows:
"The book is subtitled Long History of the Civil Rights Movement, which means that it hopes to complicate the narrative of the civil rights movement that we have grown accustomed to – a narrative that centers on the brilliance of Thurgood Marshall and the Legal Defense Fund and the heroics of the Warren Court. When I started this work many years ago a lot of people were resistant to the thrust of the work. They said: Brown v. Board of Education was American’s finest hour; Why would you want to tell a story in which that case is not central to the story? But I think it takes nothing away from the brilliance of Thurgood Marshall and the heroics of the court to talk about people on the left and the right who thought in terms of something more complicated than integration when they thought about equality, people like Julian Bond, Lonnie King, Lynn Holt, and Ethel Mae Matthews.  It’s important to realize the agency that they had how they, along with these national institutions helped to form a more perfect union.
"Although I eventually came around to thinking of all of the wonderful people in this book as dissenters, when I first started this book I was actually just as beholden to the traditional narrative as anyone else. I went to law school because of Thurgood Marshall.  I am a child of Brown v. Board of Education. And so the process of writing this book was a conscious effort on my part to be fair to all of the characters in my book, despite their many perspectives, some of which I originally couldn’t understand and didn’t necessarily like.
"Len Holt was a lawyer with the Lawyers Guild, which was tainted as a Communist organization, and who hasn’t received his due.
"Ethel May Matthews was a warrior for civil rights whom I interviewed in the housing projects of Atlanta, who taught me more than virtually anyone about the struggle against Jim Crow and the class dynamic. 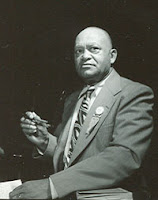 "One person in the book who symbolized my professional struggle was A.T. Walden. The son of slaves and one of the South’s first African America lawyers, Walden had been understood as a conservative, a foil of the students and progressives.  He was called a conservative and an Uncle Tom and, when I first came to this work, I frankly understood why he would have been called those names.  He was skeptical, and he never embraced school desegregation or direct action. But as I wrote the book, as I went to the archives and did a lot of digging, I learned his history: that he was a complicated man who had been moved to go to law school after seeing the lynched body of a black man in his home town.  I learned that he was a student of W.E.B. DuBois, a man whom he considered a prophet and a seer. I came to understand that his critique of the struggle for integration as only being about integration and school desegregation was in many ways similar to DuBois’ critique.  Over time, I came to understand that in order to write a nuanced narrative of the civil rights movement, it is important to appreciate how much history is biography."
Posted by Charles Johnson at 3:22 AM No comments: